Originally when I started Base Metal Games, I thought I might blog more frequently about what exactly I'm doing.  It seems like it's about time to get on with it.  :)

I have been working on a game (and game engine) since February 2013.  I keep a written journal of what I worked on each day, so I'll try to put a quick update on things I worked on today, interesting things I learned or figured out, or just general programming or game development thoughts.

I typically try to write something at 6:00pm PST each day, though my family schedule will probably make that highly unreliable.

It has been a day of cleaning up some of my build tools and working on some lighting code.  I wrote a simple build tool in C# / WPF months ago, but never really got it to "useful" status.  I finally patched it up, and now I hit one button and see the color-coded error log of my asset pipeline.  The full log is in the top window, and errors/warnings are separated out in the bottom window. 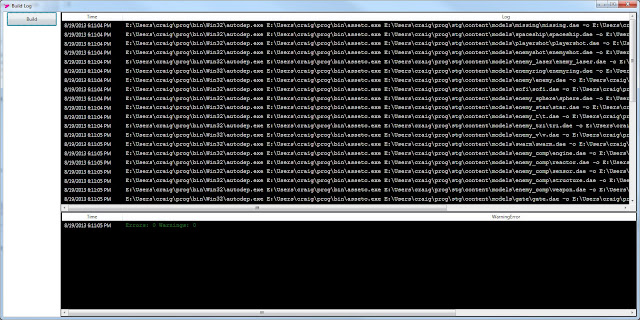 I also got my auto-dependency checker working.  It has been mostly working for months, but wasn't working recursively (for programs called from other programs) and was failing to account for missing files when doing the dependency check.  Seems much better now.  It's a pain to debug because it's using API hooking - basically, you "trick" the executable you want to load into replacing a bunch of the standard Windows functions with your own copies.  This way, you can monitor what files your tool is trying to access and see if anything has changed the next time you run it.  Very cool, a pain to debug.

Finally, I have been working on putting light probe and skybox rendering components into my component system.  I moved by whole engine architecture to a component-based system a few weeks ago, and it has been really nice to work with.  Perhaps more on that later...