Sick day - still fighting whatever it is I caught last week.  Still, no rest for the sick-ed.

So, what did I do today?
Integrating HUD rendering into the component/camera architecture: Basically, this arrangement lets me draw the same game object multiple times and let it render its own HUD display.  I have kind of been slacking on enforcing the points in bold, so going back to patch up some components so they don't draw on the wrong layers.

All of this was to try and get the Health component to display a health bar above whatever it's attached to.  Still working on that.
Also, fixed bugs:  Oh, and sometime over the weekend, I managed to get the swarm enemy to fire at my ship, which is totally awesome.  :) 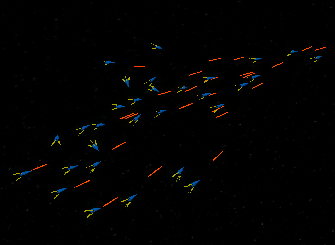