Down below you'll find some discussion of doing some "physics-based guidance control," but first the daily update:

One is a pretty typical particle system, it just emits and renders mostly ballistic sprite particles, for explosions or smoke, that sort of thing.

The other is really more of a batch model-rendering system - it takes a single model and spawns multiple rigid bodies, so it has a physical presence in the physics simulation - good for bullets, swarms, that sort of thing.

So, what if you have a bullet, and you want a small explosion when it hits something?


I wanted to work out the math required to solve this problem:


So, you want to start turning in a particular direction, then slow down and come to a stop directly facing your target.  I'm assuming that your target is stationary, otherwise this gets complicated.

First, your velocity under maximum deceleration will look something like this: 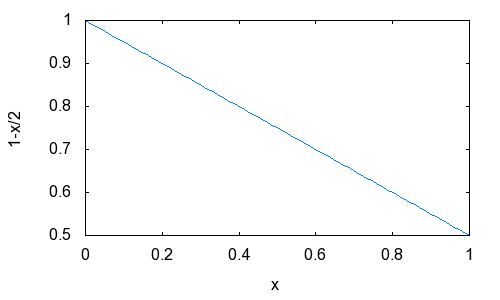 where the y-axis is your current speed, x-axis is the amount of time it will take you to stop, and the area under the curve is the distance you will travel.


So what do we need to calculate? 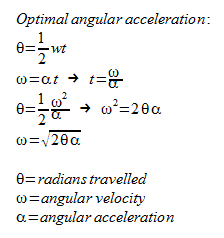 Converting between angular acceleration and torque is pretty easy:

Then you just need to compute the optimal acceleration, and make sure you don't exceed it: 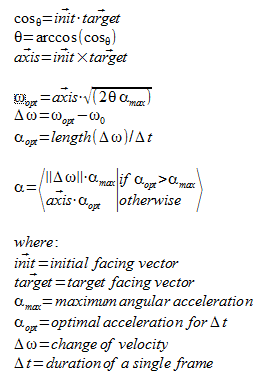 Which looks a bit more sensible in code:

All of the math looks very similar for doing the same thing with linear acceleration.